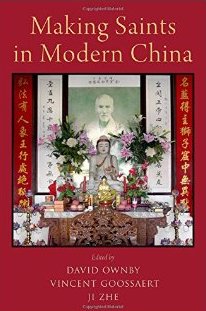 “Sainthood” has been, and remains, a contested category in China, given the commitment of China’s modern leadership to secularization, modernization, and revolution, and the discomfort of China’s elite with matters concerning religion.

However, sainted religious leaders have succeeded in rebuilding old institutions and creating new ones despite the Chinese government’s censure.

This book offers a new perspective on the history of religion in modern and contemporary China by focusing on the profiles of these religious leaders from the early 20th century through the present.

Edited by noted authorities in the field of Chinese religion, Making Saints in Modern China offers biographies of prominent Daoists and Buddhists, as well as of the charismatic leaders of redemptive societies and state managers of religious associations in the People’s Republic.

The focus of the volume is largely on figures in China proper, although some attention is accorded to those in Taiwan, Hong Kong, and other areas of the Chinese diaspora. Each chapter offers a biography of a religious leader and a detailed discussion of the way in which he or she became a “saint.”

The biographies illustrate how these leaders deployed and sometimes retooled traditional themes in hagiography and charismatic communication to attract followers and compete in the religious marketplace. Negotiation with often hostile authorities was also an important aspect of religious leadership, and many of the saints’ stories reveal unexpected reserves of creativity and determination.

The volume’s contributors, from the United States, Canada, France, Italy, and Taiwan, provide cutting-edge scholarship-some of which is available here in English for the first time. Taken together, these essays make the case that vital religious leadership and practice has existed and continues to exist in China despite the state’s commitment to wholesale secularization.